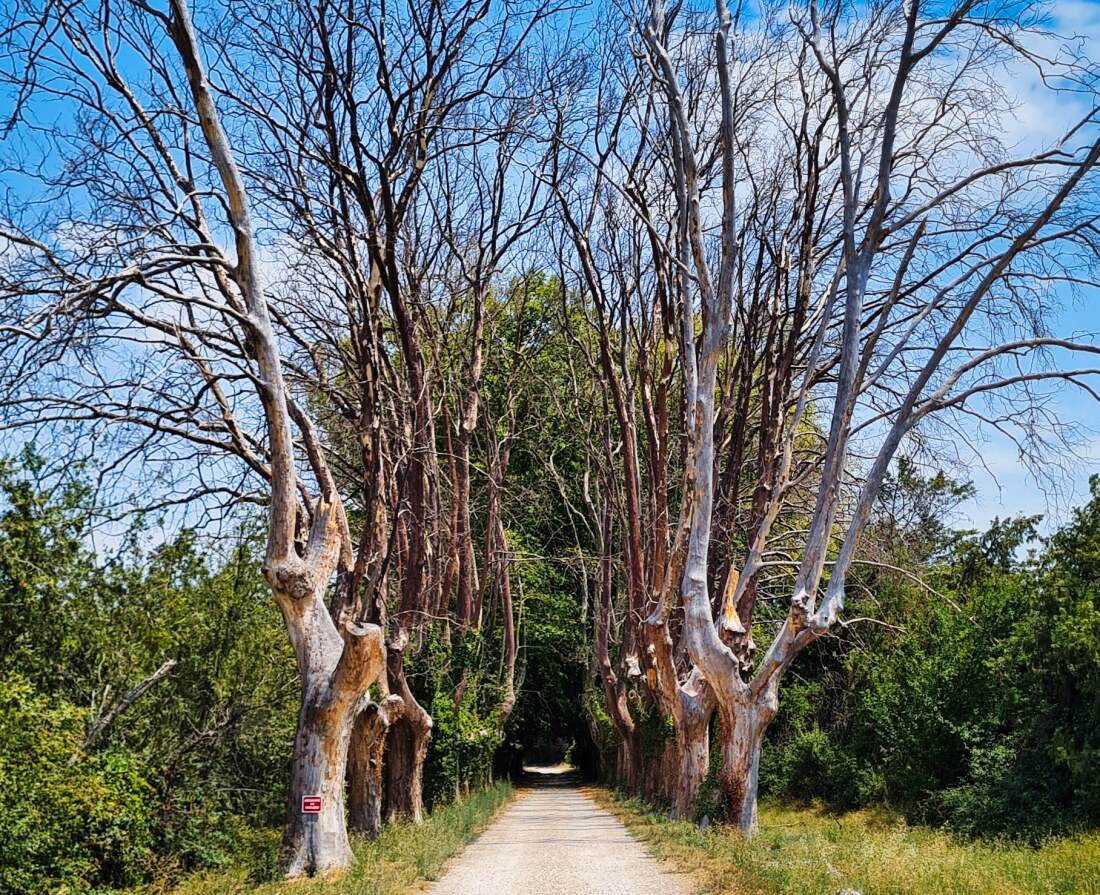 Posted at 13:05h in Experienced by firepress 0 Comments

Totally exhausted we got up around 8:00, it was probably the worst sleep of our trip so far. This wooden barrel had gone all out to win a prize as the best thermal store of the year. The disposable bedding made the body sweat profusely and the mosquitoes took revenge for the fact that Alfred Hitchkock had made a film only about “the birds” and not about the beasts of nature. Even Bram Stoker would have named his novel character Mückula if he had spent the night in this hut. When our spirits finally gave up fighting off bloodsuckers, sweat binge, lack of oxygen and fell asleep, there was suddenly a catastrophically loud bang. We both immediately stood next to the bed, Johanna startled and questioning and me terrified and defensive. We did not find the cause of the sudden acoustic phenoma. I resigned myself to the idea that a mosquito had overdone the bloodsucking and burst with a loud kawoom, or maybe it was just a thermostatic reaction of the barrel, which had expanded extensively under the hot sun and contracted shivering in the 20-degree cold night.

Anyway, again it took an eternity to calm our spirits, but the mosquitoes and the wet sweaty bodies kept waking us up.

We packed up our things, had breakfast, our baguette with chocolate cream and coffee, which we had ordered the day before, and marched off for the upcoming 15 km. Actually, it was just like the day before, with one big difference, the miles stuck to us like bird poop. They just didn’t go away, didn’t diminish. After 7 km we passed a supermarket and enjoyed a nice lunch break on a shady park bench in Sorgues, of course with cold, large drinks. After what felt like two years we came to the second supermarket on our route, 3 km before today’s destination. This was a purely organic market, which is actually great, only you don’t get anything there that you know and that your body is ravenously craving. And everything, which one would like then nevertheless, vermiesepetert one the brain, with sayings like “Really now, so a small ice cream cup for EIGHT euro? Really?” So we each bought a drink, for which we also deposited 8 Eurons. Assimilated, sitting on the floor in front of the supermarket, we vaporized this high-priced quality product.

Then we would have almost made it, if the path in reality had been just as open as the one in the hiking app. But here in our matrix we stood in front of huge gates locked with iron chains, which roared very loudly “You won’t get past here! You can’t get past here! The sun took this chance to make us ommy with some extra hot rays. It took a moment, but then I found my way around and so we walked apathetically, step by step, far too dazed to get excited, and eventually stood in front of a huge, green, closed gate, at the campground. The difference from the previous gates, was a small but important bell. Johanna diddled the button and a minute later the gate opened, as if by magic. The campsite was manageable and at the reception we were welcomed by an incredibly friendly, presumably elderly couple. These gesticulation-rich conversations in frenglish, with lots of laughter, you really should experience! Right after the business booking act, we treated ourselves to another can of Fanta on the spot to help the radiator in the charcoal burner a bit. At the price of 1.20 € also the brain calmed down and gave way, for many more drinks after the duty, so tent set up and co.

Johanna was visibly marked by the continuous march in the blazing heat. She set up her chair, sank into it like a sip of water, took a deep breath, and wanted to let herself hang a little from sheer exhaustion. Her gaze sank slowly downwards, she caught sight of her feet and, as if she had seen a ghost, awoke to new life. She spotted a broken spot, on one of her painted toenails, immediately she unpacked her hygiene case and took out the red nail polish. Any car painter would have been bursting with envy if he had seen how she managed to do it on this dirty, dusty floor. After that the exhaustion returned, there was still some macaroni from the previous day from orange and the cold drinks released by Hirn.