Posted at 20:35h in Experienced by firepress 0 Comments

Wow, what an exciting start, what a cracking two days! Two days packed with great emotions, insights, decisions, encounters and the touch of adventure.

For as long as I can remember, I’ve dreamed of that day when I set out and had imaginings of mindfully enjoying each of the first steps, aware of what was happening. But as you can imagine, the reality is somewhat different.

Stressed, tired and slightly overwhelmed, we packed our bags until early 1:00 am, but didn’t make it and therefore got up again at 6:00 am, as the farewell was planned for 10:00 am. By 9:00 our apartment was full of people asking things, telling things, laughing and crying. Totally overwhelmed and stressed, I became irritated inside, then I remembered, fortunately, what kind of people were around us. It was family and the closest friends. Those who could somehow make it possible to say goodbye to us. Not everyone was able to do it, but these people came especially just for us. With this realization, tears briefly welled up in my eyes and the irritation disappeared.

Fully in function mode, stuffing the last few things into the bags, strapping bags onto the carts, buxing carts with bags down the stairwell, turning off water and electricity, handing over keys, clarifying and explaining a few more things. Then we all stood on the sidewalk and it was time to say goodbye. So much warmth and love were overwhelming! Therefore here a bigthank you toall who were with us and also to all who thought of us! THANK YOU ! And, of course, the request to me always well also to respect my wife. Few people would have thought she would ever go along with that. But now here we were, together and ready to go. People went their ways and we took the first steps on ours. After 150 m we noticed that the wagons were suboptimally packed, with Johanna the bag dragged on the wheel and my wagon I had to constantly push down because it was not well loaded in terms of balance. Fortunately René accompanied us for the first kilometers. He filmed, photographed, observed and most importantly, he helped with the adjustment of the bags – a big thank you, Rene! Also for your crass story on Instagram about us! After the third pocket adjustment stop we realized, this will go on for the next two weeks until everything fits perfectly. After a few kilometers René left us.

Now we were the first time for us alone on our trip, a crass feeling. A short time later Müppi and his girlfriend Elena joined us and accompanied us for several kilometers. Also to you Müppi a big thank you! But at some point the farewell came here too and from now on we were really on our own.
After we had said goodbye to the two of them, we realized that it was already quite late and we had to start looking for a place to sleep. We did not go as far as planned. Because this insane day soon took its toll. Johanna was exhausted. We had completely forgotten to take care of ourselves due to all these events, accompaniments and huge emotions. We ran all day without a break and without anything to eat. We found a nice place and boiled water for tea and ready meals. In the process, we discovered that this place wasn’t as great as we thought. Because some more dog owners came by and discovered us. They were all very friendly encounters that encouraged us, but we did not want to sleep there. We moved again, about 100m deeper into the forest. It began to dawn. We had just brought the sleeping mats and sleeping bags into the tent when someone had already switched off the light. That was a surprising realization of how quickly it gets dark in the forest. We struggled into our sleeping bags and tried to sleep. 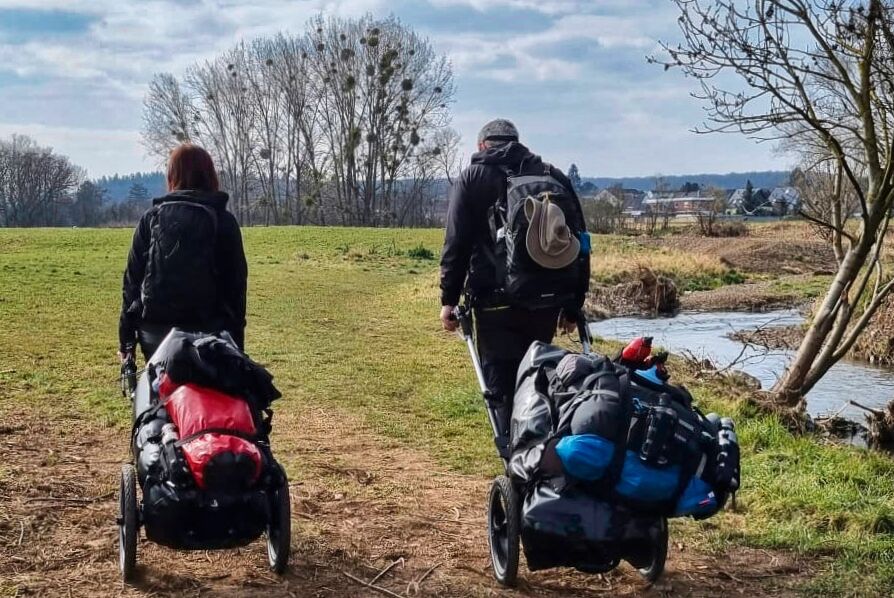